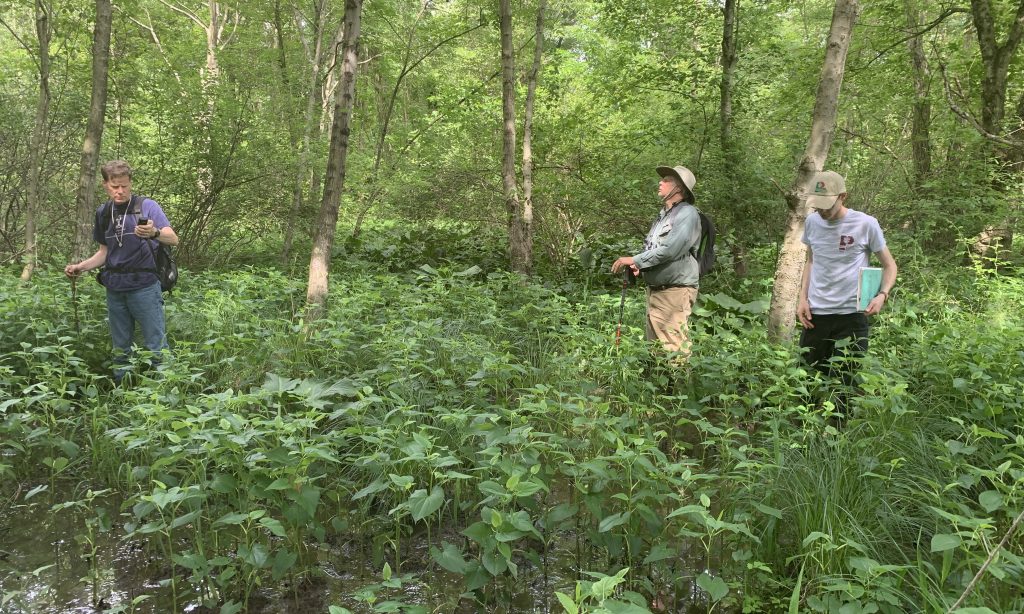 Naczi and Mitchell explore a wetland with Trust staff. Photo by C. Mendel, 2019.

On June 6, 2019, John D. Mitchell–whose undergraduate research transformed the mission of the Pennypack Watershed Association–brought his colleague from the New York Botanical Garden (NYBG), Dr. Robert Naczi, for a whirlwind tour of some of Pennypack Preserve’s most unique and high-quality habitats. This brief exploration helped guide valuable discussion with Trust staff on developing a comprehensive vegetation monitoring program.

The visit also served as a homecoming for Mitchell, who spent his childhood summers exploring Pennypack Creek Valley. As an undergrad in 1975, Mitchell combined his boyhood adventures with his burgeoning talent as a botanist to conduct an impressively thorough survey of the area’s flora. By this point the Pennypack Watershed Association (PWA)–forerunner of Pennypack Trust–had started protecting lands to establish an 800-acre wilderness park, now known as Pennypack Preserve. But Mitchell knew that protecting land from development was only the first step in creating a fully functioning ecosystem. 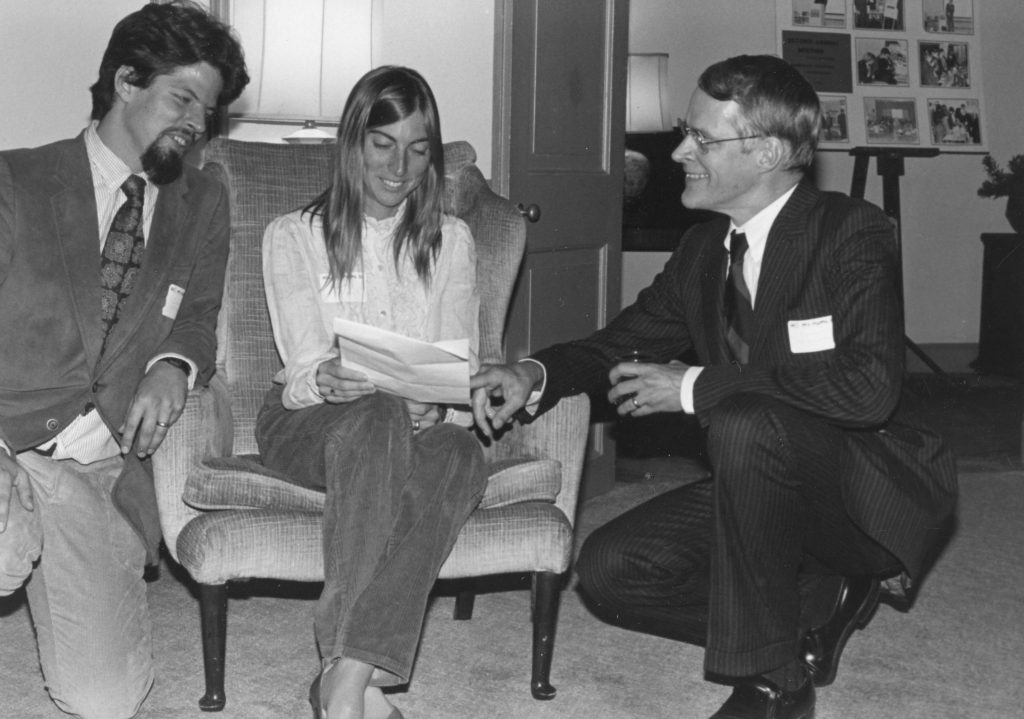 Mitchell with uncle and PWA founder, Feo Pitcairn, at a PWA annual meeting.

Armed with his survey and the support of his uncle–PWA founder, Feo Pitcairn–Mitchell presented the board with a Wilderness Management Plan intended to knit together the highly varied plant communities created by centuries of agriculture and development. The 1981 Plan played a key role in transforming the PWA from a political organization, mainly focused on water quality, into a land conservancy. Simultaneously, Mitchell began research at NYBG on Anacardiaceae—the family of plants that includes poison ivy, cashews, and mangoes. His work whisked him away to field sites throughout the world and introduced him to a community of passionate botanists, including Dr. Naczi.

Dr. Naczi specializes in the genus Carex, also known as “true” sedges, because it is one of the most diverse groups of flowering plants in the world. There is a Carex species adapted to almost every environmental condition, making them good indicators of the type and quality of habitat in which they reside. During his visit this past June, Dr. Naczi identified twenty-three species of Carex, eighteen of which had not been previously identified in the Preserve. This diversity of Carex confirmed the good health of several mature forest stands and wetlands. In contrast, the absence of Carex species in neighboring areas dominated by invasive vines and stiltgrass emphasized the need to consistently monitor for invasive encroachment in the Preserve’s healthy patches. These findings subsequently furthered Dr. Naczi’s work on the New Manual of Vascular Plants—a massive effort by NYBG to update their 1991 manual with new species identifications, ranges, and genetic and molecular data. 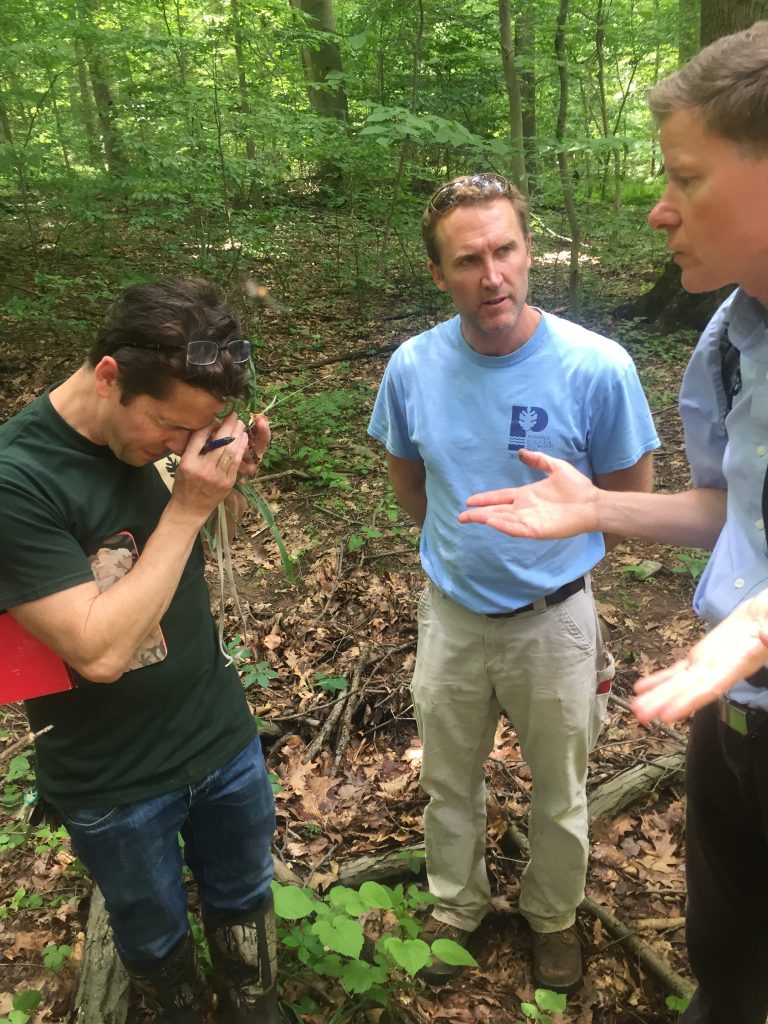 The June visit was a very important, albeit very small, step toward updating the Trust’s own main reference: Mitchell’s 1981 wilderness management plan. This guiding document provides a detailed breakdown of the Preserve by habitat type and quality, with recommendations for how to manage each area. As with the 1981 plan, the backbone of the 2020 update will be a comprehensive vegetation survey, but the Trust intends to make vegetation assessment an ongoing, seasonal process. To achieve this goal, the Trust will develop a monitoring program that uses geographic information systems (GIS) to streamline data collection and interpretation. With help from colleagues like Mitchell and Naczi, the Trust hopes to recruit botany students from local universities to perform high-level identification. A consistent need for field work, coupled with the chance to inform real land management decisions, make the new monitoring program a great opportunity for the Trust to support and inspire the next generation of environmental scientists.