The intersection of the Creek Road Trail and the Papermill Trail is the crossroads of the Pennypack Preserve. This intersection has also been at the crossroads of the Trust’s restoration efforts. In 1993, we planted 400 trees downstream of the Papermill Bridge. In 1999, we planted 1,225 trees upstream of the bridge. Just recently, in 2008, we invested $100,000 in restoring Crossroads Marsh, the ecologically precious wetland that has nearly disappeared under silt and muck. Except for occasional Free-A-Tree forays, though, the Trust’s stewardship staff focused its restoration efforts elsewhere as non-native porcelainberry vines overwhelmed the few trees still living in this untended corner of the crossroads. In fact, the Trust’s staff even gave this troublesome corner its own name: Porcelainberry Flats. 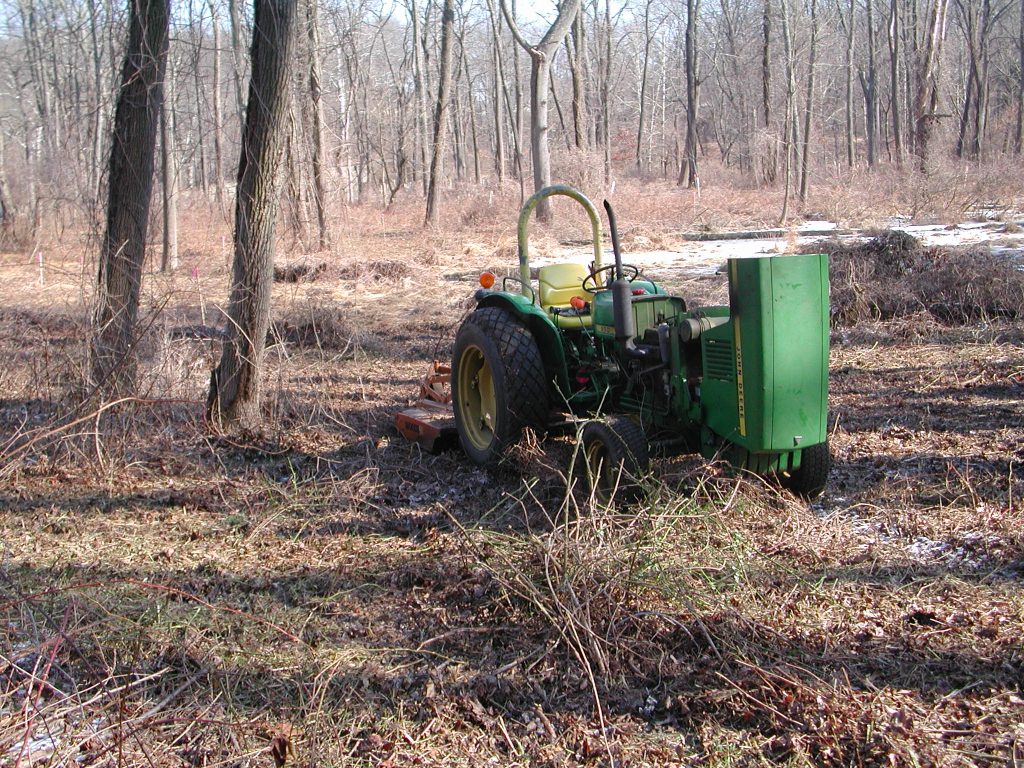 Vines were cleared through mowing and selective spraying. Photo by B. Nyholm, 2010.

Porcelainberry Flats receives the outflow from Crossroads Marsh directly across Papermill Trail. As a result, its center is perpetually boggy. That’s great for the spring peeper frogs and other amphibians that breed there in great numbers in the spring, but it presents real restoration challenges. Nevertheless, the Trust developed a plan to rehabilitate the site. During the winter of 2009-10, the stewardship staff controlled porcelainberry vines and multiflora roses on the drier land alongside the Creek Road and Papermill Trails with a combination of mechanical and chemical treatments. Then, in April 2010, with the help of over 250 Upper Moreland School District sixth-grade students who each volunteered about one hour, we replanted the area with native trees and shrubs that thrive in moist soil. Each new plant was surrounded with a wire mesh cage supported by wooden stakes to prevent deer damage.

The Trust plans to allow the wettest sections in the center of the Flats to continue their natural development as a shallow wet meadow dominated by native rushes and sedges, with buttonbush shrubs ringing the edge.